Even if the system administrator deliberately filters out all traffic except port 22 (ssh) to a single server on a site, it is very likely that you can still gain access to the other computers behind the firewall. This article shows how remote Linux and Windows users can gain access to firewalled Samba, mail, and Web servers. In essence, it shows how openSSH and PuTTY can be used as a VPN solution for your home or workplace without monkeying with the firewall. This article is NOT suggesting you close port 22; these steps are only possible given valid accounts on all servers. But read on; you may be surprised at what you can do without punching additional holes through the firewall - and punching more holes is always a bad idea.

From the Linux laptop (whose address we'll assume to be 192.168.1.106), it is possible to get access to the resources behind the firewall directly, including Samba server, Web server, and mail server which are blocked from the outside by the firewall. The firewall only permits access to the SSH Server via port 22; yet the laptop can still access the other servers.

This file must have its rights set appropriately:

Quick hint: the above command can be shortened, since the user name "sporkey" and the "HostName" are already specified in the config file. Therefore, you can use ssh work as shown below.

Since the config file maps "http" to localhost port 2200, the above command can be shortened to the following: Wait, there is a better way. Instead of creating two terminal sessions - one for ssh work, then another one for ssh http - why not put it all together in one command? The above command will establish the connection to work, forwarding the necessary ports to the other servers. The "-N" is for "Do not execute remote command", the "-f" requests SSH to go to the background, and "-q" is to suppress all warnings and diagnostic messages. So, still not short enough for you? Then create an alias, alias http='ssh -N -f -q work; ssh http' and put that in your ~.bashrc file, which is about as short as you can get, since typing http on the command line would get you to the HTTP server.

To copy files to this server, the command below is used (note that uppercase "-P" follows scp.) If you are in the .ssh directory you will see an authorized_keys2 and maybe an authorized_keys, which you may want to append to the like files on the destination server. These files are only listed as an example. Any file could be copied; but, if you copy these files to the remote server and append the contents to the remote server's authorized_key* files, then, you will not be prompted for a password the next time you make a connection. See Tip 12 in 150+ Linux Tips.

But, because you have everything in the config file, you can shorten the above command to the following:

[ To enable the key-based access mentioned above, you'll still need to append the key files to the ones in ~/.ssh on 'http'; this can now be accomplished by, e.g., running ssh http 'for a in authorized_keys*; do cat $a >> ssh/$a; rm $a; done', which will also delete the now-useless key files in your home directory on 'http'. -- Ben ]

The following command, executed from the Linux laptop, will download the index web page from the remote server (192.168.0.66):

Suppose the Linux laptop is running a web server — Is it possible for the people in the company to view the web server on the laptop (192.168.1.106), when they attach to the normal company HTTP Server (192.168.0.66)? Absolutely. Think about this because what is being suggested here is that a laptop, with no direct access to the HTTP server, is actually going to take over as the company web server. Yes, that is exactly what will be shown here; although, instead of completely taking over the company web server, which is running on port 80 of (192.168.0.66), we will add an additional web server on port 20080. If you are intent upon taking over the company web server, you would have to perform similar steps as root, since only root has the ability to take over the privileged ports. Let us start with this example first, and then you'll know how to do this on port 80. To perform this magic, /etc/ssh/sshd_config on the company web server (192.168.0.66) must have the variable "GatewayPorts" set to "yes"; otherwise, only the users logged into the HTTP server will be able to see the laptop's web page. Instead, we want everyone in the company to have direct access to the added port.

After making the change, you will need to restart the SSH daemon: In the Linux laptop's ~/.ssh/config add the following entry: The complete ~/.ssh/config is shown below. If you perform a netstat -l from 192.168.0.66, the remote company web server, you should see the following: This means that anyone in the company can view this webpage (http://192.168.0.66:20080/) on port 20080. If you wanted to make it available on port 80, the default HTTP port, the connected user would have to have root privileges.

If you did not change the /etc/ssh/sshd_config file, the gateway functionality is disabled since "GatewayPorts" defaults to "no". And executing a netstat -l (that's a lowercase 'L', not the number '1'), would return the following:

(For more tutorials by this author, please see his Soup to Nuts site.) 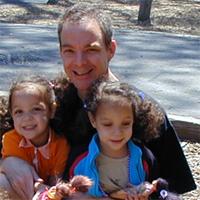 Mike Chirico, a father of triplets (all girls) lives outside of Philadelphia, PA, USA. He has worked with Linux since 1996, has a Masters in Computer Science and Mathematics from Villanova University, and has worked in computer-related jobs from Wall Street to the University of Pennsylvania. His hero is Paul Erdos, a brilliant number theorist who was known for his open collaboration with others.
Mike's notes page is souptonuts.

Copyright © 2005, Mike Chirico. Released under the Open Publication license unless otherwise noted in the body of the article. Linux Gazette is not produced, sponsored, or endorsed by its prior host, SSC, Inc.