Experiments with an iPod

What is this iPod?

An iPod is a brand of portable digital audio player designed by Apple Computer. The first three generations of iPod use two ARM 7TDMI-derived CPUs running at 90 MHz, while later models have variable speed chips with a peak speed of 80 MHz to save battery life.

This article is intended for those who want to either use their iPod with Linux, or use Linux on their iPod.

Connecting and Locating your iPod

The first step is to connect the iPod to your USB port, then determine what Linux device the iPod is connected as:

Mounting and Unmounting Your iPod

Now we can explore the iPod. For this, we need to mount it:

After mounting, the contents of the iPod can be browsed as a normal file system.

When we are done exploring, we need to unmount the iPod:

Ok, this was neat, but what about playing some music? On Linux, gtkpod can be used to copy and organize your music into playlists. After installing gtkpod, the mount point of the iPod can be specified from "Edit->Edit Preferences". Once the mount point is added, gtkpod lets you create and modify playlists, add or remove songs, and even export your Thunderbird or Evolution data to the iPod.

Podcasts are radio-style shows for the iPod. Unlike streaming audio, which requires you to listen in real time, podcasting lets you control how and when you hear your favorite shows. Some of the podcasting clients available on Linux are amaroK and BashPodder, a command line utility to download podcasts.

Installing Linux on the iPod

Now that we know how to use iPod on Linux, it's time to use Linux on an iPod. Why bother to install Linux on an iPod? Because it includes loads of new games, a movie player, a voice recorder, and the freedom to create new applications. For those who are brave enough to explore this exciting option, iPodLinux has a distribution you can use; the first, second, and third generations of iPod are officially supported.

After playing with the installer for a bit, I was able to install iPodLinux on my 60GB Photo iPod. The port uses uClinux, a Linux flavor designed for devices that lack a memory management unit (MMU). While the iPod has some MMU-type capabilities, they are not sufficient to support the Linux kernel.

Before installing Linux, it's a good idea to make a backup of the iPod boot loader and OS, so they can be restored if something goes wrong:

After the backup is done, the next step is to create a new partition on the iPod to hold the root file system for Linux.

A partition can be created by using the following command:

I created the following partitions on my 60GB iPod:

Once the partitioning is done, create a filesystem with an ext3 journal:

and set the maximal mount count between two filesystem checks to zero to prevent fsck being run on it:

NOTE: -3 is required in make_fw only for 4th generation iPods.

Once this is done, we can copy the new image and kernel modules to the iPod:

For userland installation, I downloaded the iPodLinux FS and performed the following steps to install the filesystem:

Mount the iPod root partition: Extract the filesystem: and finally, unmount the iPod partition: And we are done! But before you start playing Doom on iPod, it needs to be rebooted.

To reboot, disconnect your iPod from the USB port. If the iPod did not automatically reboot, hold down the menu and the play buttons for 3 seconds to reboot it. After rebooting, keep the back button pressed to boot Linux, otherwise the default interface will load.

After the cross compiler is installed, the next thing to do would be to write a 'hello iPod' program (save the following code as hello.c):

Once done, compile the program:

copy the program to the iPod: and reboot the iPod after unmounting the partition: After booting into floydzilla, goto "File browser->/mnt/myprogs" and click on the "hello" to see output of the program on iPod. 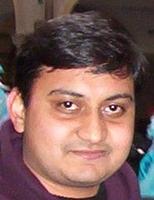 I am currently working for Induslogic, India. I have a Bachelor's degree in Computer Science.

I am a strong supporter of Free Software. In my free time, I write programs or read books. My areas of interest includes Device drivers, P2P and operating systems. I maintain my blog at http://www.nirendra.net.

Copyright © 2005, Awasthi Nirendra. Released under the Open Publication license unless otherwise noted in the body of the article. Linux Gazette is not produced, sponsored, or endorsed by its prior host, SSC, Inc.