The Basics of DNS

This article is a result of a discussion on the Answer Gang list, in which Rick had brought up some interesting and common problems with DNS (Domain Name Service). Since DNS is 1) a critical part of the Internet infrastructure, 2) one of the most important - and yet very easy - services Linux users can provide for each other, and 3) seemingly poorly understood and seen as Deep Wizardry by most Linux enthusiasts, I asked Rick to expand on the issue. His response follows.
-- Ben

As a matter of logical categories, I can spot four distinct categories of "DNS service": three of the four are dead simple. The fourth isn't too difficult if you can refer to example zonefiles as your model. Let's run through them, in turn, from simplest to most complex.

The idea here is that you want to run a local nameserver for its caching abilities, but you're not serving up authoritative DNS information of your own or for someone else. You just want local machines to have somewhere _local_ to query for name lookups, rather than having all queries go across the wire to your ISP or elsewhere -- in order that, most of the time, the answer's already in your nameserver's cache because some other local machine also made the same query in the recent past.

How do you enable it, you ask? You just turn on your nameserver. Conventional DNS daemons (BIND9, MaraDNS, Posadis, PowerDNS, Twisted Names, Yaku-NS) default to that sort of service, so you just switch them on, and they work.

Oh, and on the client side, you'll want to configure your various machine to consult that nameserver in the future, via "nameserver" entries in their /etc/resolv.conf files (the configuration file for a client machine's "resolver library", the DNS client that on typical Linux machines is built into 'glibc'). For client machines that are on DHCP, you can automate this configuration via a suitable entry in dhcpd.conf.

This type of service is only subtly different: Basically, the nameserver daemon is one that lacks the smarts to, by itself, recurse through DNS namespace on queries. Instead, it forwards all queries it receives to a full-service nameserver elsewhere, which does the job. Your local (caching forwarder) nameserver merely caches recently received answers in case they're needed again, and of course ages the cache. On the plus side, avoiding the very difficult coding problems posed by _not_ handling recursive-resolver functionality means the daemons can be very small and secure. Examples include dproxy, Dnsmasq, DNRD, ldapdns, and pdnsd. pdnsd is particularly popular for really small networks and laptops, in particular because it stores its information in a disk-based cache that is (therefore) non-volatile.

How do you enable it? You put the IPs of one or more "upstream" full-service nameservers in its configuration file (to tell it where to forward to). Then, you turn it on, and it does its thing without further fuss.

Again, it's that simple.

This is the case where your friend Alice Damned <alice@mydamnedserver.com> asks you "Will you help me by doing secondary nameservice for mydamneddomain.com?" You respond with, "Yes. My nameserver, ns1.example.com, is at IP address 10.0.42.1. Please add that to your allowed-transfer list, add an appropriate NS line to your zonefile, and make my IP authoritative -- and we'll be in business." (Your telling Alice that is kind of superfluous, actually, in the sense that those things are her problem to figure out and implement, but let's suppose you're trying to be helpful.) She also should have been equally helpful by telling you what IP address her primary nameserver lives on. If not, you do this, to find out:

The global DNS should return with a hosthame plus other details (that you can disregard, for this purpose) from Alice's domain's Start of Authority (SOA) record, something like:

Which tells you that the primary DNS is claimed to be provided by ns1.mydamneddomain.com. Use the 'host' command to get the corresponding IP address. Let's say 'host' returns IP address 10.0.17.1 for that hostname.

How do you enable it? If you already are running a nameserver capable of authoritative service (let's say, BIND9), then you need to lavish five minutes of your time on a new "stanza" (paragraph) in your nameserver's main configuration file, instructing it to (also) do secondary nameservice for this domain. Again, using BIND9 as an example, one would add this to '/etc/bind/named.conf' (or wherever you put local additions, e.g., '/etc/bind/named.conf.local'):

Notice the comment line: You want to have on hand reliable means of contacting Alice in case you need to talk to her about problems with her domain -- and ideally means of communication that do not go through the domain in question (as "Your domain is offline" mails don't work too well when they're blocked by the fact that the domain's offline).

In the case of BIND9, you can make your nameserver reload (or load) a single zone such as mydamneddomain.com using BIND9's 'rndc' (remote name daemon control) administrative utility, as the root user:

You should, if everything's configured right, now see your local cached copy of Alice's primary server's zonefile (her domain's DNS information) pop into (per the above) directory /var/cache/bind/, as file mydamneddomain.com.zone. The moment you see that, you're done: The contents and configuration of the zonefile are strictly Alice's problem.

The nice thing about setting up secondary DNS is (1) it's pretty much a set-up-and-forget affair on your end, and (2) it's the other person's (Alice's) job to notice most sorts of problems. Moreover, it's usually be her screw-up. So, doing secondary is an easy way to help a friend, and involves only a tiny amount of one-time work.

This is the exception, the case where you actually need to know what you're doing: This is where you're Alice. You have to maintain the zonefile, which then gets propagated to all your secondaries via zone-transfer mechanisms. You have to check on your secondaries from time to time, making sure they haven't shot you in the foot by, e.g., forgetting to carry forward that "slave" stanza when they rebuild their servers.

How do you enable it? Here is Alice's BIND9 "stanza" that operates her end of the mydamneddomain.com operation:

Again, notice the comment lines, basically notes that Alice keeps for her reference in case she wants to reach Joe in a hurry about him shooting her domain in the foot. The "allow-transfer" list is the list of IPs that are permitted to transfer (pull down) Alice's zonefile, just as the "masters" list in Joe's earlier stanza listed the IPs of machines that Joe's secondary service expects to be able to pull down transfers from.

That leaves only the other difficult problem, which is the composition and maintenance of Alice's zonefile. I'm going to wimp out and claim it's out of scope for a brief article on simple DNS service, but will point out that I publish a set of example BIND9 zonefiles and configuration files that many people have used as examples to work from: http://linuxmafia.com/pub/linux/network/bind9-examples-linuxmafia.tar.gz

Did I say "the other difficult problem"? Oops, there are more: as publisher of primary (master) authoritative nameservice, you need to be concerned not only that your domain's zonefile contents are correct, but also that your domain itself is set up correctly, at your domain registrar -- including enumerating, there, all of your domain's nameservers to make them "authoritative" (i.e., tagged as a reliable source of information on the domain's contents, as opposed to just caching other nameservers' information if/when it happens to pass through). Getting your domain records wrong can have a variety of ill effects, and I can only recommend that (as with the finer points of zonefile contents) you ask a knowledgeable person, maybe in your user group, to check your work. Along those same lines, by all means use R. Scott Perry's excellent DNS-checking CGI scripts at http://www.dnsreport.com/, to check (in a single, amazingly useful report) both your domain records and your (in-service) zonefiles.

It's important to note that there are many good nameserver daemons, other than BIND9 -- which is important for historical reasons, but has the annoying problems of being, as I say in my list of all known DNS server programs for Linux, "a slow, RAM-grabbing, overfeatured, monolithic daemon binary". That list is in my knowledgebase at "DNS Servers" on http://linuxmafia.com/kb/Network_Other/, and contains a number of good choices for particular DNS situations. My page aspires, among other things, to identify which type of the four classes of service each package can do. I hope it's useful to people.

A wide variety of special-purpose primary-nameservice configurations are possible, such as running a deliberately non-authoritative nameserver (not shown in either your domain records or your zonefile) to provide master DNS service from a protected machine inaccessible and unadvertised to the public -- but details are beyond this brief article's scope. 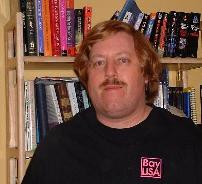 Rick has run freely-redistributable Unixen since 1992, having been roped in by first 386BSD, then Linux. Having found that either one sucked less, he blew away his last non-Unix box (OS/2 Warp) in 1996. He specialises in clue acquisition and delivery (documentation & training), system administration, security, WAN/LAN design and administration, and support. He helped plan the LINC Expo (which evolved into the first LinuxWorld Conference and Expo, in San Jose), Windows Refund Day, and several other rabble-rousing Linux community events in the San Francisco Bay Area. He's written and edited for IDG/LinuxWorld, SSC, and the USENIX Association; and spoken at LinuxWorld Conference and Expo and numerous user groups.

His first computer was his dad's slide rule, followed by visitor access to a card-walloping IBM mainframe at Stanford (1969). A glutton for punishment, he then moved on (during high school, 1970s) to early HP timeshared systems, People's Computer Company's PDP8s, and various of those they'll-never-fly-Orville microcomputers at the storied Homebrew Computer Club -- then more Big Blue computing horrors at college alleviated by bits of primeval BSD during UC Berkeley summer sessions, and so on. He's thus better qualified than most, to know just how much better off we are now.

Copyright © 2005, Rick Moen. Released under the Open Publication license unless otherwise noted in the body of the article. Linux Gazette is not produced, sponsored, or endorsed by its prior host, SSC, Inc.