Out With It, Old Beast!

While assembling my PC I used an unbranded CD- drive to save some money. After three years of use, misuse and mostly abuse, the CD- drive has started showing signs that it has lived well beyond its estimated life time.

We got first signs of its age when it refused to eject. After much exercise with its eject button I was able to get the CD out. However the drive did not take this treatment kindly and next time whenever I pushed the eject button, the drive would come out a little and then retract back again. To use it, my brother and I designed an ingenious brute fore algorithm. One of us would push the button and the other one would grab hold of the CD drive as soon as a bit of it came out and then pull it out the rest of the way.

I am collecting money to buy a new CD drive. Moral of the story: " Do not push anything beyond its age limit"

In a thread seen on the Answer Gang:
Yes -- you could try cleaning the lens. You can by a CD-cleaning pack for about Ł5 (if you're in the UK).

[Neil Youngman] You could try polishing the CDs as well. I've solved similar problems with Pledge (furniture polish) and a duster.

At your own risk of course.

I've heard that putting Cd's in the freezer (-18C) actually helps too!! No, I'm not joking

By Dale A. Raby

Some time ago, I bought a Gateway 2000 equipped with a P5-90 processor for the princely sum of $35.00. Not surprisingly, it didn't work. I purchased a new i430VX motherboard and upgraded the CPU to a blazing fast 166 MHz Pentium. I scrounged enough memory to make the beastie run... I believe it has 82 meg now.

Scrounging a CD ROM drive from another machine, a hard disk drive, floppy drive, modem and video card from other machines, I installed Mandrake Linux 7.0, hooked up a printer, a parallel port Iomega Zip 250 drive and went to work publishing my fledgling webzine.

Now, I needed my Zip drive for backups. Even Linux... at least of that era... wasn't foolproof. However, as careful as I tried to be, I kept knocking the Zip drive off of the top of the tower where I was keeping it. Zip drives do not take well to being dropped. I tried mounting it on its side on the desk top, but this didn't work either... the third time I spilled iced-tea on it, I looked for another solution.

There was a spare bay for a drive to be mounted, but the parallel port model wasn't set up for that. It would fit, and could sit on top of the CD ROM drive. The problem was the interface cables. There had to be two of them from the drive; one to the printer, and one to the computer's parallel port, both of them on the outside of the case. I tried every possible orifice to squeeze the ends of the cables to the outside world... but without success. They were just too big to fit through any of the usual places where one might connect an internally mounted peripheral.

I noticed a square metal plate on the back of the case secured by four screws. Upon removing the plate, I found a grate cut into the metal. I suppose it was for mounting an extra fan... like that would ever become necessary in those days! The opening would be big enough except for the grate.

No problem. Coming from the Get a Bigger Hammer school of computer repair, I had just the tool.

I went out into the garage, grabbed a heavy duty extension cord and my Milwaukee Sawzall. For those not familiar, with it, this tool is ordinarily used to remove unwanted walls from buildings, cut openings into roofs, or saw through automobile frames and the like. It weighs in around twenty pounds and exudes masculinity from every angle. OK, so it was overkill.

I put a metal cutting blade in it and made short work of the sheet metal grate. After vacuuming up all the metal filings and larger chunks of metal that had fallen into the machine, I ran my two interface cables and the power cord into the case and secured them to the Zip drive, looped one back and plugged it into the parallel port, ran the other to the printer, and I was off.

That machine still works... now with a 20 GB hard disk using a drive controller to bypass the BIOS limitations. It runs Mandrake Linux 8.0 these days, but has about reached the zenith of its upgradability. I am using it now as a database computer to catalog the books, DVDs and other collections in my house. It has served faithfully for some five years now.

The Zip drive? Still in its bay inside the machine with the cables running through the jagged hole in the back of the case.

I once found a colleague with his mouse on its back, ball compartment open, poking a tube of superglue into the inside. I naturally asked him what he was doing.

"I'm gluing this washer/o-ring thingy back onto the roller - it has slipped and my mouse only works intermittently".

I'd never seen such a washer/o-ring thingy, but sure enough, on each of the rollers, at the point where the ball contacted them was a shiny black ring, about a millimetre thick and two and a half wide, looking for all the world like a tiny grommet or o-ring. He was trying to glue the crud he'd picked up off his desk, polished to a high sheen by constant movement.

Washing the CPU, and some other dumb things...

Some days ago, I oiled my system fans and, since 'I was there', I decided to change the old silver grease on the cpu. I made a rather lame cleaning swoop over the cpu removing most of the grease from the chip and spread it over all those L-thingies on the cpu-board. Brilliant. I tried to clean the grease with alcohol, without any success. My cpu was still internally shortcircuited.

Well, so be it. I took the cpu out and headed for the bathroom. I was just about to wet the detergent in order to rub the cpu with it when I remembered how silver jewelry is cleaned - with toothpaste. Allright! I rubbed the cpu wit the toothpaste (all the time paying attention not to damage the warranty sticker that was on the bottom of the cpu

) and slowly washed it with lukewarm water. Perfect.

Then I saw that a part of the cpu, upper left corner of it (THE cpu - that little chip) was missing. It had been broken - probably when I placed the cooler on its place the last time (it did take more brute force than usual... it involved a screwdriver and a long scratch over the mainboard made by it when my hand slipped - oh yeah, the motherboard survived that - hail Abit :) ) - and now, it had fallen off.

Facing the unevitable, i dried the cpu with a dry towel (I *broke* it, what else could possibly happen to it?) and put it back to its place. The power goes on, the system goes up. All is well and operating. I'd love to see Intel surviving that

To end the story, let's just say that the cpu is both overclocked and undervoltaged. Mainboard is also o-clocked, but that did require some extra decivolts...

OneRing - a simple frontend for Sauron 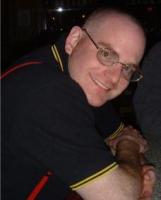 Mike is the Editor of Linux Gazette. You can read what he has to say on the Back Page of each issue. He has been a Linux enthusiast since 1991 and a Debian user since 1995. He is SSC's web technical coordinator, which means he gets to write a lot of Python scripts. Non-computer interests include Ska and Oi! music and the international language Esperanto. The nickname Iron was given to him in college--short for Iron Orr, hahaha.