Not The Answer Gang

Sluggo wrote:
Well, Rick will make that issue however big he makes it, and if I think it's excessive I'll cut it down again. He gets brownie points for actually citing specific instances. That makes it less likely that I'll delete the whole topic. :)

Mick Conry wrote:
I knew there was a reason we needed an editor ;-)
(and not the vi/emacs kind, they're better at starting arguments than settling them).
m

Ben Okopnik wrote:
<grin> You have a dark side to your sense of humor, Jason; I find that I'm twisted enough to appreciate that, too.

Jason Creighton wrote:
"dark side"? What on earth are you talking about? :)

Ben wrote:
<Spocking an eyebrow> Nothing, nothing. Just clearing my throat. As you were, carry on.

Heather Stern wrote:
I've left the thread so far intact so the rest of the lgang can see it. Welcome aboard. Faber should ACK when he's added you, until that the gang should group reply to include you.

Sluggo wrote:
I got tired of Iron, comrade. It was s'posed to be a pun on Iron Orr. A friend in college made it up. (No, not the girl who always said "Mike Or What?") Then somebody turned it around to Iron Mike (Tyson), which I did *not* intend.

But I still have a year left on iron.cx before it expires.

Ben wrote:
So now you're a slug'o'iron. Or a hell of a fire in a train firebox. Or a pulmonate mollusc, genera Linux^H^H^Hmax. Or a very slow ship. Or a typographer's spacer. Or a fake coin.

Jim Dennis wrote:
I actually had to look up mechants. The gist of it is obvious from context but the real meaning is: "wicked" or "bad."

Sluggo wrote:
It's not so much "easy" as that French and English have so many words in common. Plus the Unix terms (root, /bin) are borrowed from English. I found that reading a simple introductory grammar book (the paperback Penguin one is good) to fill in "je", "ça", "le", "de", "est", "cette", "pour" goes a very long way. It may not help you speak French or write an answer, but it helps you understand short paragraphs of French you may encounter. I've never studied French formally, but it gave me enough to manage in Belgium. (Where is the train station? Which bus goes to Verviers?)

Or to read the ATM messages. That was a trip. My friend and I decided to go to Liège for the weekend from Germany. I was American and he was Russian, and neither of us spoke French. I went to the ATM and withdrew the smallest amount: 100 franks. I had no idea how much 100 franks was but the large number was ominous. Still, I reasoned the smallest amount the ATM gives must be around $20. Eventually I realized it was $33.

A Querent wrote:
i have a 1996 4runner at times when i park i can smell hot oil there are no leaks nowhere. the motor is excellent clean. where could this be coming from. it doesn't happen all the time. thanks

Thomas wrote:
Please, please do not waste my time with pointless questions!!! This is not Linux specific (or LWM specific).

Ben wrote:
Oh, c'mon, Thomas. You know what the answer is - the querent is running Wind*ws. It's only Linux that creates no muss, no fuss, and no greasy aftertaste.

Thomas wrote:
<I roll my eyes> Silly me!! That must be it.

Ben wrote:
Any 4runner of the latest version of the kernel should be upgraded - particularly if it goes as far back as 1996, even if the motor, I mean kernel is "excellent clean" (e.g., "make clean" was run before compilation.) The hot oil smell is the poor machine trying to get some work done and bogging down in warmfuzzy "Wind*ws Will Not Harm You, Little Human!" themes, automatic MSN installations, and "Wind*ws has detected that your wire-haired terrier has peed in the corner. Please wait while we download the appropriate 147.3Gb driver" messages.

Ben wrote:
What most people never realize is that it _is_ a screensaver. I mean, who's going to believe that an operating system can actually *crash?* Who do they think they're kidding, anyway? The only problem with the BSOD screensaver is that you have to enter the Micr*s*ft EULA in Linear B (don't forget the breathing marks) as the password...

Thomas wrote:
I say screensaver -- it might as well now be synonymous with it :-)

Ben wrote:
<shrug> It was *obvious*, and I'm shocked - shocked, I tell you - that you tried to dodge answering such a simple, and above all _relevant_ question.

Ben wrote:
Tune in next week for our next thrilling episode of The Answer Gang, when Thomas and I explain the benefits of sharpening a chainsaw while it's running (the same precautions as for using Wind*ws apply [1], so it's absolutely safe! Oh, here - this tourniquet will help. Don't get any on my nice chainsaw.) [1] Let someone else do it. Oh, wait - friends don't let friends sharpen running chainsaws... 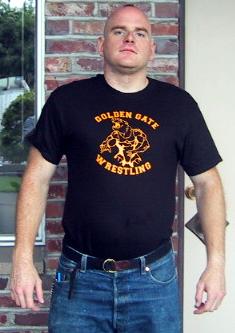 I write the recently-revived series "The Linux Weekend Mechanic", which was started by John Fisk (the founder of Linux Gazette) in 1996 and continued until 1998. I'm also a member of The Answer Gang.

I was born in Hammersmith (London UK) in 1983. When I was 13, I moved to the sleepy, thatched roofed, village of East Chaldon in the county of Dorset. I am very near the coast (at Lulworth Cove) which is where I used to work.

I first got interested in Linux in 1996 having seen a review of it in a magazine (Slackware 2.0). I was fed up with the instability that the then-new operating system Win95 had and so I decided to give it a go. Slackware 2.0 was great. I have been a massive Linux enthusiast ever since. I ended up with running SuSE on both my desktop and laptop computers.

While at school (The Purbeck School, Wareham in Dorset), I was actively involved in setting up two Linux proxy servers (each running Squid and SquidGuard). I also set up numerous BASH scripts which allowed web-based filtering to be done via e-mail, so that when an e-mail was received, the contents of it were added to the filter file. (Good old BASH -- I love it)

I am now 18 and studying at University (Southampton Institute, UK), on a course called HND Business Information Technology (BIT). So far, it's great.

I enjoy walking, and often go on holiday to the Lake District, to a place called Keswick. There are numerous "mountains", of which "Great Gable" is my most favourite.

I am also a keen musician. I play the piano in my spare time.

I listen to a variety of music. I enjoy listening to Rock (My favourite band is "Pavement" (lead singer: Stephen Malkmus). I also have a passion for 1960's psychedelic music (I hope to purchase a copy of "Nuggets" reeeeaaall soon).

Copyright © 2003, Mike Orr (Sluggo) and Thomas Adam. Released under the Open Publication license unless otherwise noted in the body of the article. Linux Gazette is not produced, sponsored, or endorsed by its prior host, SSC, Inc.